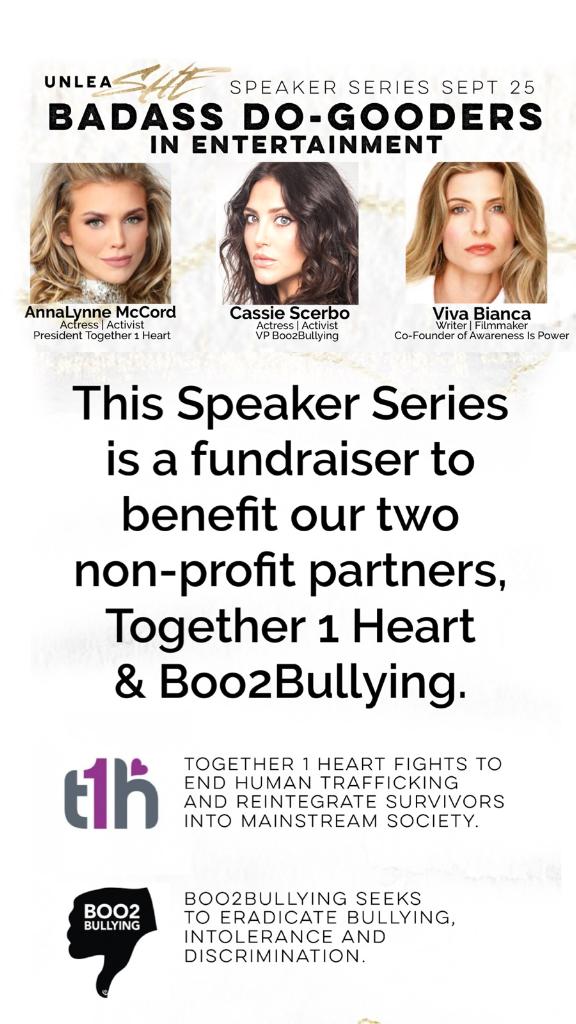 THIS EVENT IS A FUNDRAISER TO BENEFIT OUR NON-PROFIT PARTNERS, TOGETHER 1 HEART AND BOO2BULLYING
*Please read all the way to the bottom for very important details

What does it mean to be a Badass Do-Gooder? Someone who is a badass in business and doing good for their community and the world.

“The people who are crazy enough to think they can change the world, are the ones who do.”

So we’re calling out to all the visionaries, dreamers, and innovators of the world. Those who never fit quite right in a box. The rebel with a cause. Yes, we are talking to you!

Actress, Activist & President of Together 1 Heart

AnnaLynne McCord is an American actress, writer, director and producer. Known for playing the vixen, vamp and roles of a darker nature, McCord first gained prominence in 2007 as the scheming Eden Lord on the FX television series Nip/Tuck. Followed by credits on CW’s 90210, TNT’s Dallas, Stalker on CBS, FOX’s Jerry Bruckheimer produced pilot, Lucifer and, currently, ABC’s Secret’s and Lies. Her turn as a disturbed and delusional teenager in the 2012 film, Excision, was widely acclaimed. For her role in Excision, McCord won “Best Actress” at the Malaga International Week of Fantastic Cinema in 2012. McCord’s recent film, 68 Kill won the Audience Award at SXSW and her performance has been hailed strong, fierce and powerful. McCord’s most recent television show is POPTV’s Comedy “Let’s Get Physical” alongside Jane Seymour and “Breaking Bad’s” Matt Jones.

During her free time, McCord has contributed to various charities, stating that “working with charitable organizations and giving back has been (her) saving grace as it has taught (her) how to rescue (herself).” She is the President of “Together1Heart” which empowers women and children victimized by human-trafficking and sexualized violence. In 2009, McCord was awarded a U.S. Congressional Honor by Connecticut Congresswoman Rosa De Lauro for her anti-trafficking work. In 2019, AnnaLynne was nominated for Best Actress at the Madrid International film festival for her role in Milkshake Girls, a short film about sex-trafficking fiscally sponsored by Together 1 Heart.

Cassie Scerbo has proven herself to be a triple threat in the fields of acting, singing and dancing, as well as being a philanthropist and producer. Scerbo was a series regular on the hit ABC Family drama series, “Make It or Break It.” The show followed a group of teen Olympic hopefuls as they trained and prepared for their day in the spotlight. Scerbo also starred in ABC Family’s “Teen Spirit”, Universal’s “Bring it On: In it to Win it”, Star Trek:Progeny, Neil Labute’s, “Bench Seat”, “Truth or Dare” on Netflix, as well as playing the infamous Nova Clarke hecta in pop culture’s hit franchise movies, “Sharknado”. Other roles include guest spots on CSI: Miami, Hot in Cleveland, 10 Things I Hate About You, Bad Judge and Baby Daddy. Cassie is currently recurring on ABC’s Grand Hotel. Cassie was previously signed to Geffen records as one of 5 girls chosen by Ron Fair for the girl group “SPG”, and continues to enjoy making music to this day. Scerbo has also been dancing since age 4, including performances at the annual Macy’s Thanksgiving Day Parade in NYC (where she also sang), the Superbowl half-time show, and received 2nd place in the International Hip Hop Championships held in Miami, Florida.

Aside from her career as an actress, Scerbo is enrolled as an online college student at SNHU and has studied at the Italian Cultural Institute of Los Angeles. Scerbo’s main passion throughout school has been environmental issues. Cassandra has always been a lover of all charity and is the current VP of the 501(c)3, Boo2Bullying. Some other causes she’s affiliated with include Padres Contra el Cancer, The Thirst Project, 18 for 18 (where Scerbo has skydived 4 years in a row to raise funds and awareness towards sex trafficking), The Creative Coalition, as well as frequent visits to the Children’s Hospital of Los Angeles.

More recently, in partnership with Together 1 Heart, Viva wrote, directed and produced the award-winning social justice short film MILKSHAKE GIRLS–an expose into the sex trafficking epidemic in the US–which won Best Director and Best Short Film at the London Independent Film Awards and was in the Official Selection at LA International Film Festival (Oscar and BAFTA qualifying) and Madrid International Film Festival, 2019.

Discussion on how to use your platforms to create social impact and why your heart-centered mission is important to your core values and brand.

Dialogue around social entrepreneurship and our partnerships with Boo2Bullying & Together 1 Heart and how you can collaborate with organizations that address the social issues you care about.

Designated time to connect with other dreamers and doers, like yourself