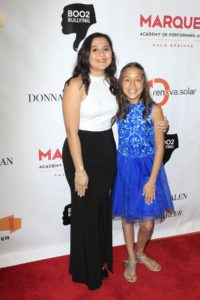 Story by By Scott Schroeder

But it was a big jump for the sisters to audition this spring for the 1st Annual “Desert’s Got Talent” showcase competition in Palm Springs presented by the nonprofit organization BOO2BULLYING.  Most of the contestants were older and had extensive performing experience.  Solange and Juliette were understandably thrilled to both be selected to perform at the Annenberg Theater on May 6.  On that magical evening, 15 finalists ranging in age from 11 to 73 performed a wide variety of musical genres superbly for a supportive audience of more than 300 that chose the winners by texting votes on their cell phones.

Eleven-year-old Solange Signoret won the audience’s heart—and the 1st place prize at Desert’s Got Talent–with her stirring rendition of a Whitney Houston classic. The diminutive young star commanded the stage with confidence, energy, emotion and a powerful voice that elicited non-stop applause and admiration, much like her performances at Idyllwild Arts and in Raymond Cree Middle School in Palm Springs.

But that is only the beginning of this story about how participation in an arts talent show advanced the missions of two local nonprofit organizations dedicated to helping children and teenagers overcome adversity and fulfill their potential.

Desert’s Got Talent is a new signature event to raise awareness and funds for Boo2Bullying, the Palm Springs and Los Angeles-based nonprofit founded in 2011 by photographer Dimitri Halkidis. The purpose of the talent competition is to give performers the opportunity to self-express and promote unity against bullying and all forms of discrimination that victimize young people in schools, neighborhoods, online and at home.  The organization conducts anti-bullying assemblies and programs, reaches out to bullied youth at community events and festivals, and produces videos and testimonials that reach tens of thousands of young people online.

Solange and Juliette were brought into the world by parents with severe drug problems and adopted at very young age by Silvia Signoret and her husband Tony.  Silvia founded For the Children, a Nonprofit Foster Parent Association for the Coachella Valley, in 2003. Since then the Signorets have literally opened their home and hearts to children in desperate need and enlisted other families to do the same for youngsters touched by turmoil and strife.   She and Tony, an Assistant Superintendant for Human Resources in the Palm Springs and Desert Sands Unified School Districts, have nine children, seven of whom are adopted.

The payoff for fostering and adopting children like Solange and Juliette can be dramatic.  In addition to her musical talents, Solange is a self-proclaimed social activist.  Influenced at age seven by civil rights and LGBT activist George Zander, she wrote her own speech and spoke at a rally in support of gay marriage in 2013.  Solange has continued to write and speak out against injustice, most recently at the Rainbow Summit and at the Women’s March in Palm Springs.  This fearless and self-directed dynamo has also achieved a Brown Belt in Karate and won a National Championship.

Fifteen-year-old Juliette Signoret fell in love with the performing arts at age five and has performed widely, including most recently with the Palm Springs Madrigal singers at Carnegie Hall in New York City and in the High School’s production of “Annie.”  Juliette is a Brown Belt in Karate with two National Championships and one World Championship on her resume.  She’s also excited about securing an audition slot this fall for the TV hit, “The Voice.”

But first things first–both sisters will be defending their titles at the Karate World Championships in Arizona this July.  Meanwhile their adoptive mother has found another worthy cause to support on behalf of children and teens.  Inspired by Desert’s Got Talent, Silvia Signoret has volunteered to help Dimitri Halkidis bring Boo2Bullying assemblies to middle schools throughout Riverside County.